Via our Ethos of being “committed to clients”, “ fair on fees” and “serious about service” No.18 has a modern, forward thinking approach in providing advice, representation and services to our clients which is alive to adapting to the changing legal services environment.

We are therefore keen to receive applications from barristers with established practices who share the same ethos.

We are known for our friendly workplace, culture and professional work ethic.  We have an excellent support team of enthusiastic and experienced clerks and business services staff who are committed to the practice development of each member and to achieve our strategic plan.

Chambers offers true expertise, advice and guidance, providing an excellent foundation for your practice. We welcome applications from established practitioners with successful practices in one or more of Chambers' core work areas.

As well as the normal routes of Pupillage and Tenants, we also welcome applications for Door Tenancies.

We invite applications from high calibre barristers with established practices in our core areas. Applications for tenancy should be made in writing to Mark Windebank (Senior Clerk) & Tracey Hennessey our Head of Chambers, and should enclose a CV and any supporting documents relating to their practice that will assist with the consideration of the application. Such applications will be dealt with in the strictest confidence.

We invite applications from high calibre barristers with established practices in our specialist areas.

We are interested in barristers looking to develop their practice regionally.

Applications for door tenancy should be made in writing to Mark Windebank (Senior Clerk) & Tracey Hennessey our Head of Chambers.   Applicants should enclose a CV and any other relevant information.  Again, applications will be dealt with in the strictest confidence.

We invite applications from high calibre barristers with established practices in our specialist areas.

We are interested in barristers looking to develop their practice regionally.

Applications for door tenancy should be made in writing to Mark Windebank (Senior Clerk) & Tracey Hennessey our Head of Chambers.   Applicants should enclose a CV and any other relevant information.  Again, applications will be dealt with in the strictest confidence. 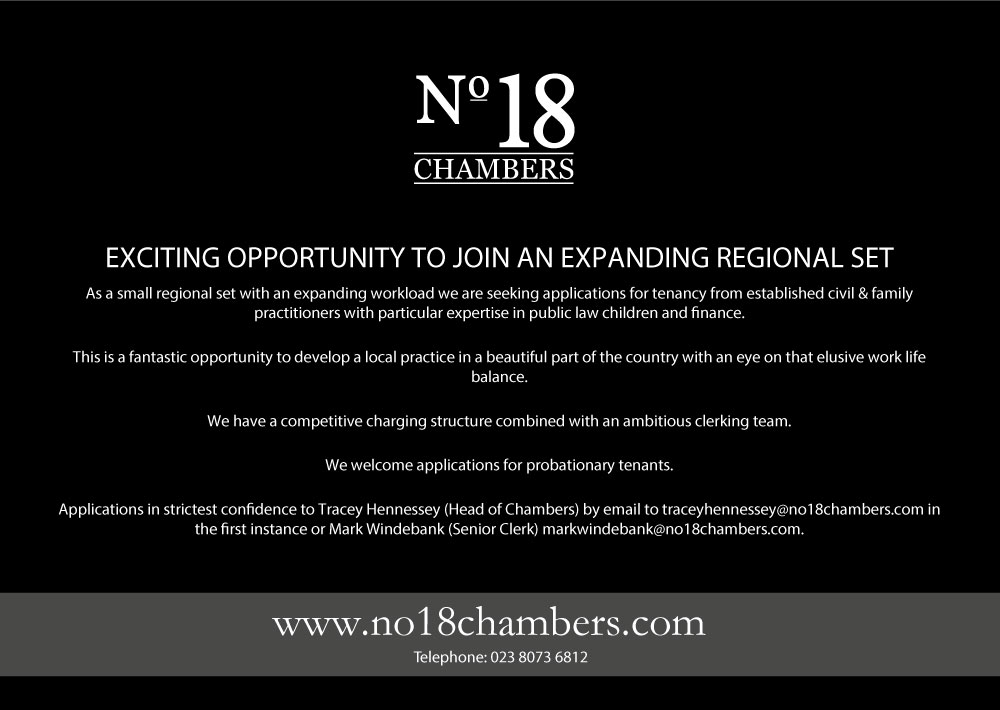 We are committed to progress in all practice areas and to the continued recruitment of ambitious, dedicated and outstanding individuals seeking a successful career at the Bar.

We believe that regular recruitment has been the key to our success and we pride ourselves on the opportunities given to our pupils in respect of training and development.

Pupillages are offered with a view to tenancy, where pupils demonstrate the requisite ability, commitment and determination during the twelve months' pupillage.

Generally, pupils have two pupil supervisors throughout the year and can expect to see a broad range of work across Chambers’ specialist practice groups.

In the first six months of their pupillage the majority of their time is spent going to court and doing paperwork for their pupil supervisor. However, we also ensure that pupils are given an opportunity to shadow other members of Chambers. Towards the end of the first six months, pupils are encouraged to go to Court with the more junior members of Chambers to gain relevant experience of the type of work they will likely be undertaking at the start of their careers. In the second six months, pupils can expect to be in Court regularly seeing a variety of work.

Chambers is committed to the Equality and Diversity Code for the Bar and encourages applicants from groups which are under-represented in Chambers.

Copies of both the Chambers Equality and Diversity Code and Pupillage Policy are available on Request.

For further information please contact the head of the pupillage committee, Barnaby Large.

No 18 welcomes applications for mini-pupillage. We offer mini pupillages all year round. During your mini pupillage you can expect to attend court with one of our barristers, meet our tenants and current pupils.

Only those who have commenced or already completed a full time Higher or Further Education course are eligible to apply. Both those undertaking a Law and a non-Law degree are encouraged to apply. Chambers considers that those in either their final year of a Law degree or on the Law Conversion course are best placed to benefit fully from a mini-pupillage.

Unfortunately Chambers does not offer any work experience scheme or mini-pupillages for children currently at secondary school.

No 18 is committed to equal opportunities.

Please note that mini-pupillages at No 18 are not formally assessed.

Applications should be made by way of a covering letter and CV to the Head of Mini Pupillage, Rachel Chapman.

No.18 Chambers currently requires a full time 2nd Junior Clerk to join its expanding team. The successful applicant can expect a salary of circa £27.5k per annum based on relevant experience. We are seeking a clerk with an efficient professional manner, a good standard of education and proven communication skills to join our supportive clerking team.

The main areas of law covered within Chambers are Family, Chancery, Commercial, Employment, Property, PI & Clinical Negligence, Immigration and Public Access. Chambers prides itself on its highly personable and professional approach. On a day to day basis the role will include assisting in managing the diaries of members of chambers and you will have the full support of your line manager. You will also take an active role in the practice development of the members along with their continued marketing and business development. Previous experience as a Barristers Clerk is desirable but not essential.

Duties will include but are not restricted to:

It is desirable, although not essential as training will be given, that applicants have some experience of managing diaries and negotiating fee's with clients. Other desired experience would be a good working knowledge of the range of family/civil funding including Immigration fees, conditional fees and High Cost legal aid cases and an understanding of the Meridian system.

The successful applicant will be: